Brothers of Usenet is an open and active Usenet board but currently not accepting new registrants until further notice. 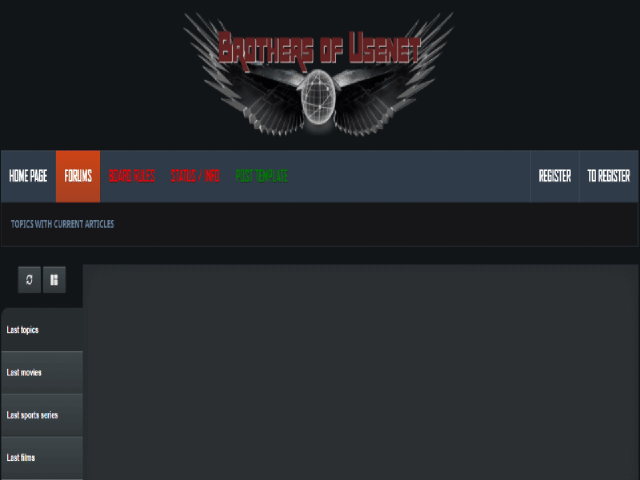 Established in March 2012, Brothers of Usenet is one of the largest and oldest Usenet forums in German-speaking countries. Almost 96% of its users come from Germany, according to traffic statistics, and have several thousands of members since the beginning.

As a forum, it has a distinguished area in which its users can exchange files and links with one another. It also has a swap exchange area, and you can find almost everything that has to do with Usenet.

Unfortunately, new registrants are not allowed at the moment. It had its last registration opportunity in the first two weeks of December 2019, and there will be no users to be accepted before or after the date. They decided not to take any registrants because of technical malfunction and problems with the backups. In addition, the developers notice some of its users are distributing their own content to other several Usenet providers and other NZB forums for their own good.

Multiple registrations are also undesirable. Any person holding other accounts will be blocked. Brothers of Usenet were reported to be using fingerprinting and accessing each of its members’ IP address, installed plug-ins, browser, resolution, operating system, etc. to make sure that they only have one account.

Brothers of Usenet has a background and structure similar to other Usenet boards. It was not coincidental because it is a cooperation between other German-speaking Usenet boards to counteract the unwanted distribution of their content.

Terms and conditions, lists of codes, smilies, and cookie usage are posted on the front page of the website. It also has a preview of their latest number of discussions, messages, and members. Currently, the Brothers of Usenet have 35,931 members.

The languages available are English and Dutch.

Brothers of Usenet was reportedly free of charge. Anyone that has concern can message them through their contact support form available even for non-members.

The website does not disclose its retention to binary.

The color of the interface is quite complicated, but it’s easy to adjust over time. It has a red and black background with colorful usernames and fonts. Smilies and gifs are allowed, and the categories of download can be easily found in the leftmost corner of the page.

The forum software of Brothers of Usenet is created by XenForo and other customized designers. It has a secured and private browsing technology regulated to its users and website as a whole.

The average response rate of Brothers of Usenet is 5457 milliseconds, with an uptime response of 99%. Brothers-Of-Usenet has servers in the United States, and its platform is powered by a Cloudflare web server.

Brothers of Usenet is one of the oldest and largest forums in German-speaking countries. Over time, they were experiencing technical problems that resulted from its self-shutdown with its other allied providers from the police raid last 2017.

Brothers of Usenet have loyal and supportive users, and it made the website an established entity. While it is close to registration at the moment, we hope the registration occurred in 2019 was not the last to board before the end of their term in 2023.